The Oosterdam started sailing in 2003 . Former names: none. The Oosterdam is registered in Rotterdam, Netherlands. The Oosterdam has 1012 cabins. 67 percent of the staterooms on board have balconies.

You can expect between 2024 to 2429 passengers on a typical sailing. This means that at the higher number (usually peak and holiday sailings) Oosterdam has a space ratio of 33.9 . (A space ratio less than 33 means that you may find the ship crowded in areas. A space ratio greater than 39 means that there should be plenty of space for each passenger.) When this ship isn't sailing at capacity the space ratio can be as good as 40.7.

OOSTERDAM is the second ship in the Vista Class of 5 ships. Officially christened in 2003 by Her Dutch Royal Highness, Princess Margriet of the Netherlands, the ms Oosterdam is the second in our series of Vista-class ships. As such she embraces the latest industry and environmental technologies such as her use of a diesel-electric power plant for optimal energy efficiency and an Azipod propulsion system that maximizes maneuverability.

During April 2016 drydock 18 balcony cabins and 9 inside cabins were added to the Observation Deck. 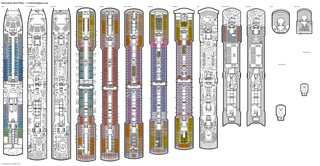