The Sirena started sailing in 1999 . Former names: R Four, Ocean Princess, Tahitian Princess. The Sirena is registered in Majuro, Marshall Islands. The Sirena has 349 cabins. 66 percent of the staterooms on board have balconies.

You can expect between 698 to 803 passengers on a typical sailing. This means that at the higher number (usually peak and holiday sailings) Sirena has a space ratio of 37.7 . (A space ratio less than 33 means that you may find the ship crowded in areas. A space ratio greater than 39 means that there should be plenty of space for each passenger.) When this ship isn't sailing at capacity the space ratio can be as good as 43.4.

The ship last major refurbishment was in May 2019 .

The following ships share the same class as this ship. This means the basic design and layout of the ship is the same. For the most part the cabins will be identical among these ships, but may be decorated differently.
1998 - Insignia
1998 - Nautica
1998 - Regatta
1999 - Sirena

There are 3 special needs cabins on this ship. These cabins have been modified for accessibility purposes.

This ship was originally one of the eight ships ordered by Renaissance Cruise Line before it went out of business.

During drydock May 6 to May 18, 2019 the ship received major upgrades. This included opening the ceiling on the grand staircase and featuring a chandelier. Cabins lightened up with light blue and gray colors and taupe accents, the headboard is cushinoned and reaches the ceiling, USB ports and plugs are added to both sides of the bed. Bathrooms recieved new fixtures and lighting, showers now have a French glass door. New carpet added to hallways, new doors on cabins with contemporary room signage. The Grand Dining Room received a new chandelier, light-colored leather chairs. The Grand Bar is now more open with new carpeting. Horizons received new lighter colored furniture and carpet. 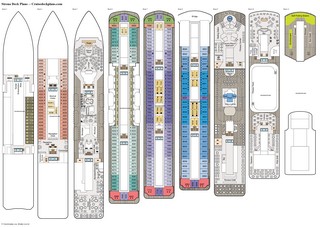