You can expect between 2130 to 2556 passengers on a typical sailing. This means that at the higher number (usually peak and holiday sailings) Celebrity Constellation has a space ratio of 35.3 . (A space ratio less than 33 means that you may find the ship crowded in areas. A space ratio greater than 39 means that there should be plenty of space for each passenger.) When this ship isn't sailing at capacity the space ratio can be as good as 42.4.

The ship last major refurbishment was in May 2017 .

Following an initial dry dock in 2010, which added some Solstice-class features to the ship, in April 2013 Celebrity Constellation received 66 brand new cabins, and the introduction of 107 AquaClass cabins onto the ship on this go-round. Other new features include: New verandas for suites, an upgraded basketball court, craft beer in Michael's Club and the introduction of iLounge. The ship also has Wi-Fi throughout, new color schemes, new carpeting, new upholstery and new sun loungers on the pool decks. 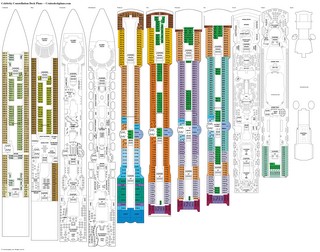