You can expect between 2984 to 3581 passengers on a typical sailing. This means that at the higher number (usually peak and holiday sailings) Carnival Freedom has a space ratio of 30.7 . (A space ratio less than 33 means that you may find the ship crowded in areas. A space ratio greater than 39 means that there should be plenty of space for each passenger.) When this ship isn't sailing at capacity the space ratio can be as good as 36.9.

There are 13 decks on this ship. The highest deck number is 14. The number of decks with passenger cabins is 8.

The following ships share the same class as this ship. This means the basic design and layout of the ship is the same. For the most part the cabins will be identical among these ships, but may be decorated differently.
2002 - Carnival Conquest
2003 - Carnival Glory
2004 - Carnival Valor
2005 - Carnival Liberty
2007 - Carnival Freedom

The abbreviation Carnival uses for this ship is FD.

CARNIVAL FREEDOM is the fifth "Conquest class" ships for Carnival, and will be joining the Conquest, Valor, Glory, and Liberty in the Carnival fleet. At 110,000 GRT and carrying 2,974 passengers, the Carnival Freedom is too large to pass through the Panama Canal.

During drydock 2/16/19-3/03/19 new shops were added to deck 5 including Carnival Adventures that sells swim shorts, sunscreen, snorkles and other gear. On starboard side of Lido Buffet Bonsai Sushi Express was added. The deli in the Lido Marketplace was rebranded with new food selections. The Less Stress Pool and hot tub on deck 10 were removed and Waterworks was added with a 203 foot long AquaTunnel slide and 212 foot long Twister slide and spash zone. The Spa Whirlpool was removed and replaced by a aerobic room. The mini golf course was moved from deck 11 to deck 12. The internet cafe was moved to the port side of deck 5. 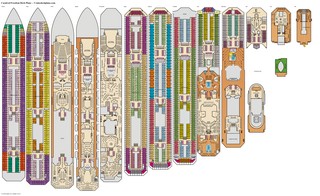