You can expect between 1968 to 2362 passengers on a typical sailing. This means that at the higher number (usually peak and holiday sailings) Westerdam has a space ratio of 34.9 . (A space ratio less than 33 means that you may find the ship crowded in areas. A space ratio greater than 39 means that there should be plenty of space for each passenger.) When this ship isn't sailing at capacity the space ratio can be as good as 41.8.

The ship last major refurbishment was in Jan 2020 .

This ship underwent a major upgrade in 2007. Some of the decks were extended length wise by 130 feet. 34 new passenger cabins were added to decks 6, 7 and 8. As a result some aft balconies were made narrower. Some other changes included expanding the Sea View Pool area on deck 9, Explorations Cafe replaced the Oak Room, Windstar Cafe was removed and new shops were added. 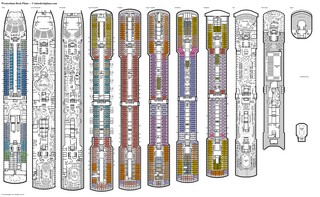