You can expect between 2596 to 3115 passengers on a typical sailing. This means that at the higher number (usually peak and holiday sailings) Star Princess has a space ratio of 35 . (A space ratio less than 33 means that you may find the ship crowded in areas. A space ratio greater than 39 means that there should be plenty of space for each passenger.) When this ship isn't sailing at capacity the space ratio can be as good as 42.

There are 16 decks on this ship. The highest deck number is 17. The number of decks with passenger cabins is 7.

STAR PRINCESS is the third vessel of a series built for P&O Princess.

During December 2017 drydock Sabatini's was changed to Sabatini's Italian Trattoria. This included updated decor and a new menu. Every cabin was updated to have a Princess Luxury Bed. The kids area was updated to Camp Discovery. Some enhancements were made to Boutiques. The spa received new fitness equipment and treatment rooms were upgraded. New carpet and upholtery throughout the ship. 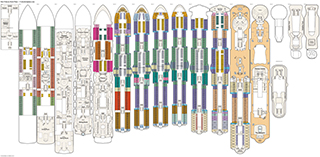