You can expect between 388 to 466 passengers on a typical sailing. This means that at the higher number (usually peak and holiday sailings) Silver Whisper has a space ratio of 61.3 . (A space ratio less than 33 means that you may find the ship crowded in areas. A space ratio greater than 39 means that there should be plenty of space for each passenger.) When this ship isn't sailing at capacity the space ratio can be as good as 73.5.

The ship last major refurbishment was in Dec 2018 .

There are 10 decks on this ship. The highest deck number is 10. The number of decks with passenger cabins is 6.

SILVER WHISPER is the second of 2 new buildings for Silversea which were designed on the successful first pair. 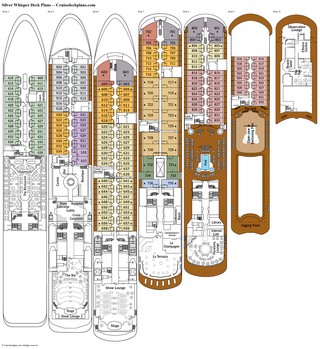