You can expect between 252 to 302 passengers on a typical sailing. This means that at the higher number (usually peak and holiday sailings) Silver Cloud has a space ratio of 56 . (A space ratio less than 33 means that you may find the ship crowded in areas. A space ratio greater than 39 means that there should be plenty of space for each passenger.) When this ship isn't sailing at capacity the space ratio can be as good as 67.2.

The ship last major refurbishment was in Aug 2017 .

There are 9 decks on this ship. The highest deck number is 9. The number of decks with passenger cabins is 4.

During 2017 drydock $40 million was spent transforming ship into an expedition cruise ship. The Zagara Beauty Spa was added. A Photo Studio (which teaches cruisers to edit and manage photos) was added. The steel exterior was reinforced for sailing in ice condidtions. The bow was replaced with a reinforced ice-class bulb. Underwater sonar was added to detect ice and other impediments. New windows were added to help resist polar temperatures. 10 vista suites were taken out of service on deck 4. 2 vistas suites taken out of service on deck 5. Removed 12 vistas suites on deck 6 and 12 vistas suites on deck 7 and converted to 12 silver suites. Reclass 2 silver suites to Mediallion suites. 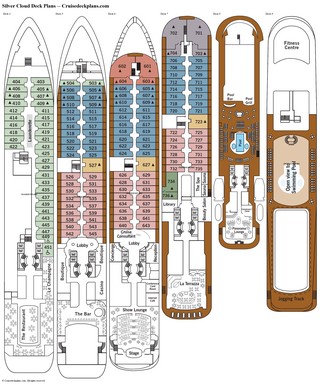