You can expect between 706 to 777 passengers on a typical sailing. This means that at the higher number (usually peak and holiday sailings) Seven Seas Voyager has a space ratio of 63.1 . (A space ratio less than 33 means that you may find the ship crowded in areas. A space ratio greater than 39 means that there should be plenty of space for each passenger.) When this ship isn't sailing at capacity the space ratio can be as good as 69.4.

The ship last major refurbishment was in Nov 2016 .

There are 12 decks on this ship. The highest deck number is 12. The number of decks with passenger cabins is 6.

The following ships share the same class as this ship. This means the basic design and layout of the ship is the same. For the most part the cabins will be identical among these ships, but may be decorated differently.
1996 - Minerva - No longer sailing
1999 - Seven Seas Navigator
2001 - Seven Seas Mariner
2003 - Seven Seas Voyager

There are 4 special needs cabins on this ship. These cabins have been modified for accessibility purposes.

In October 2013, Voyager underwent redecoration of all Penthouse Suites and Horizon and Observation lounges. It also got custom-crafted furnishings, wall coverings, original artworks, new lighting and new carpets. New furniture was added to the Deck 11 relaxation area and Deck 12. 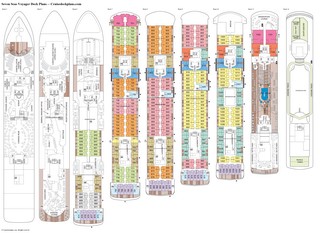