You can expect between 2014 to 2417 passengers on a typical sailing. This means that at the higher number (usually peak and holiday sailings) Sea Princess has a space ratio of 32.1 . (A space ratio less than 33 means that you may find the ship crowded in areas. A space ratio greater than 39 means that there should be plenty of space for each passenger.) When this ship isn't sailing at capacity the space ratio can be as good as 38.5.

The ship last major refurbishment was in Nov 2017 .

There are 14 decks on this ship. The highest deck number is 15. The number of decks with passenger cabins is 7.

The following ships share the same class as this ship. This means the basic design and layout of the ship is the same. For the most part the cabins will be identical among these ships, but may be decorated differently.
1995 - Sun Princess
1997 - Dawn Princess - No longer sailing
1998 - Sea Princess

There are 19 special needs cabins on this ship. These cabins have been modified for accessibility purposes.

ADONIA was built for P&O Princess as the SEA PRINCESS. In May 2003 she transferred from Princess Cruises to P&O Cruises as ADONIA joining her sister OCEANA (formerly OCEAN PRINCESS).

During drydock Nov 4 to 18, 2017 the movie screen was replaced, Crooners Bar received a face lift, new furnishings added in cabins, reclass of some cabins to Club Class, and the Youth area was updated.. 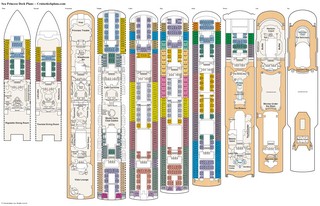