You can expect between 3560 to 4272 passengers on a typical sailing. This means that at the higher number (usually peak and holiday sailings) Royal Princess III has a space ratio of 33.4 . (A space ratio less than 33 means that you may find the ship crowded in areas. A space ratio greater than 39 means that there should be plenty of space for each passenger.) When this ship isn't sailing at capacity the space ratio can be as good as 40.1.

The ship last major refurbishment was in Oct 2016 .

The following ships share the same class as this ship. This means the basic design and layout of the ship is the same. For the most part the cabins will be identical among these ships, but may be decorated differently.
2013 - Royal Princess III
2014 - Regal Princess
2017 - Majestic Princess
2019 - Sky Princess
2020 - Enchanted Princess
2021 - Discovery Princess

There are 39 special needs cabins on this ship. These cabins have been modified for accessibility purposes.

The Royal Princess III is a new class for Princess. The new ship design has come under fire from critics because it lacks features found in older model ships. For example the promenade deck does not circle the ship. There are no midship stairs on all decks. There is no aft pool. The main pool is small for the size of the ship. Princess also did away with the Explorers Lounge on this ship. However the Piazza is much larger and the Retreat area has been expanded.

During Oct 2016 drydock stairs were added from the aft of Lido deck to aft of Sun deck. Crew stairs in center of ship were converted to passenger stairs. 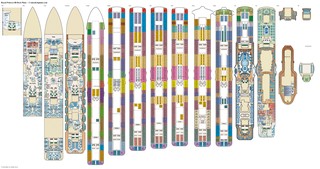