The Oriana started sailing in 1995 . Former names: none. The Oriana is registered in Hamilton, Bermuda. The Oriana has 941 cabins. 14 percent of the staterooms on board have balconies.

You can expect between 1882 to 1882 passengers on a typical sailing. This means that at the higher number (usually peak and holiday sailings) Oriana has a space ratio of 36.7 . (A space ratio less than 33 means that you may find the ship crowded in areas. A space ratio greater than 39 means that there should be plenty of space for each passenger.) When this ship isn't sailing at capacity the space ratio can be as good as 36.7.

The ship last major refurbishment was in Nov 2016 .

There are 13 decks on this ship. The highest deck number is 13. The number of decks with passenger cabins is 6.

The following ships share the same class as this ship. This means the basic design and layout of the ship is the same. For the most part the cabins will be identical among these ships, but may be decorated differently.
1995 - Oriana - No longer sailing
2000 - Aurora

There are 8 special needs cabins on this ship. These cabins have been modified for accessibility purposes.

With her signature tiered stern decks, Oriana is elegant and attractive. She has been specifically designed to suit British tastes; the broad teak promenade and lido decks are great for sun bathing and watching the world go by; the card room and wood panelled library are ideal for relaxing in, as are the bars including the Lord's Tavern sports bar and the iconic Anderson's bar.

Oriana's signature features are a stunning atrium with a Tiffany glass ceiling, a panoramic Crow's Nest bar and Marco Pierre White's Ocean Grill restaurant situated in the sumptuous surroundings of the Curzon Room. In addition to Ocean Grill, Oriana boasts other fabulous restaurants, including Sorrento, an Italian restaurant, and the Mediterranean styled Al Fresco. She also has a theatre, cinema, show lounge, nightclub and casino to ensure that entertainment is always within easy reach. 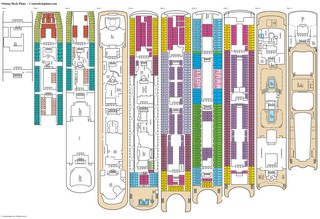