You can expect between 2344 to 2813 passengers on a typical sailing. This means that at the higher number (usually peak and holiday sailings) Norwegian Star has a space ratio of 32.6 . (A space ratio less than 33 means that you may find the ship crowded in areas. A space ratio greater than 39 means that there should be plenty of space for each passenger.) When this ship isn't sailing at capacity the space ratio can be as good as 39.1.

The ship last major refurbishment was in May 2018 .

There are 14 decks on this ship. The highest deck number is 14. The number of decks with passenger cabins is 9.

The following ships share the same class as this ship. This means the basic design and layout of the ship is the same. For the most part the cabins will be identical among these ships, but may be decorated differently.
2001 - Norwegian Star
2002 - Norwegian Dawn

There are 24 special needs cabins on this ship. These cabins have been modified for accessibility purposes.

NORWEGIAN STAR was intended for service with Star Cruises but following the acquisition of NCL and a review of tonnage deployment it was decided that the ship and her sister would be deployed with NCL.

During a major dry dock in 2010 new Family Suites and Interior cabins were added to deck 12. Moderno, O'Sheehans and LaCucina were added. Spinnaker lounge was relocated to the aft of deck 7.

During May 2018 drydock Bier Garten bar on deck 14 was renamed Sky High Bar; The Kid spash area on aft of deck 12 was removed and transformed into a adult only area called Spice H2O - However this Spice H2O is a scaled down version of the same venue found on larger ships; Planet Kids on deck 13 was renamed to Splash Academy; The waterslides on the pool deck were removed. 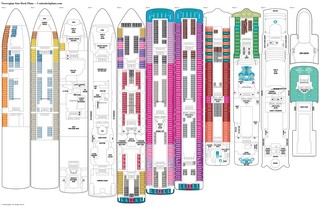