You can expect between 2394 to 2873 passengers on a typical sailing. This means that at the higher number (usually peak and holiday sailings) Norwegian Gem has a space ratio of 32.6 . (A space ratio less than 33 means that you may find the ship crowded in areas. A space ratio greater than 39 means that there should be plenty of space for each passenger.) When this ship isn't sailing at capacity the space ratio can be as good as 39.1.

The ship last major refurbishment was in Nov 2020 .

During 2015 drydock O'Sheehans Bar & Grill was added to deck 8. Moderno restaurant was moved to deck 13 near Cagneys. Mojito Bar replaced Star Bar. The Bowling alleys in Bliss were removed. 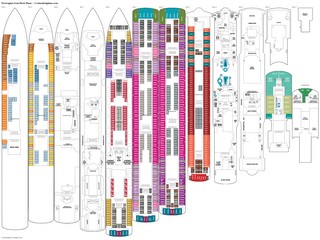