You can expect between 4348 to 5218 passengers on a typical sailing. This means that at the higher number (usually peak and holiday sailings) Norwegian Escape has a space ratio of 31.5 . (A space ratio less than 33 means that you may find the ship crowded in areas. A space ratio greater than 39 means that there should be plenty of space for each passenger.) When this ship isn't sailing at capacity the space ratio can be as good as 37.9.


There are 20 decks on this ship. The highest deck number is 20. The number of decks with passenger cabins is 12.

There are 47 special needs cabins on this ship. These cabins have been modified for accessibility purposes.

The Norwegian Escape is a larger version of the Breakaway class of ships. It features one more deck of cabins, more public space including a larger more open main pool area. The Escape class also has two venues extending out on the forward part of the wrap around outer promenade deck. NCL also added two hot tubs to the public sun deck on the top forward part of the ship.

Although the Norwegian Breakaway is a new class for Norwegian, many of the staterooms share the same layout and features as the Breakaway class. However the sister ships to Norwegian Escape will have more significant differences to the earlier class. These ships include Norwegian Joy, Norwegian Bliss and Norwegian Encore. 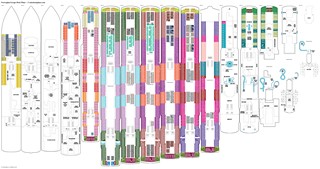