You can expect between 2340 to 2808 passengers on a typical sailing. This means that at the higher number (usually peak and holiday sailings) Norwegian Dawn has a space ratio of 32.9 . (A space ratio less than 33 means that you may find the ship crowded in areas. A space ratio greater than 39 means that there should be plenty of space for each passenger.) When this ship isn't sailing at capacity the space ratio can be as good as 39.4.

The ship last major refurbishment was in Jun 2016 .

There are 14 decks on this ship. The highest deck number is 14. The number of decks with passenger cabins is 9.

The following ships share the same class as this ship. This means the basic design and layout of the ship is the same. For the most part the cabins will be identical among these ships, but may be decorated differently.
2001 - Norwegian Star
2002 - Norwegian Dawn

The ship went under a major drydock in Jun 2016. During that drydock O'Sheehans was added to Deck 8 midship in place of Blue Lagoon. Moderno was moved to deck 13 and replaced Star Bar. LeBistro and LaCucina switched places. Spinnaker lounge became Bliss Ultra Lounge. Los Lobos Cantina, a Mexican themed restaurant, was added to part of the Garden Cafe. Public areas and staterooms received new carpeting and fixtures. 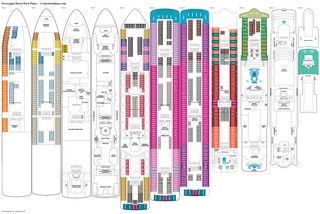