You can expect between 3560 to 4272 passengers on a typical sailing. This means that at the higher number (usually peak and holiday sailings) Majestic Princess has a space ratio of 33 . (A space ratio less than 33 means that you may find the ship crowded in areas. A space ratio greater than 39 means that there should be plenty of space for each passenger.) When this ship isn't sailing at capacity the space ratio can be as good as 39.6.

The ship last major refurbishment was in Mar 2020 .

The following ships share the same class as this ship. This means the basic design and layout of the ship is the same. For the most part the cabins will be identical among these ships, but may be decorated differently.
2013 - Royal Princess III
2014 - Regal Princess
2017 - Majestic Princess
2019 - Sky Princess
2020 - Enchanted Princess
2022 - Discovery Princess

Majestic Princess is a sister ship to Royal Princess and Regal Princess with some major venue changes. The Sanctuary is now known as the Hollywood Conservatory and the Retreat is known as the Hollywood Pool Club. The aft pool that was added to Regal Princess was removed and made into a outdoor exercise circuit. The buffet was named World Fresh Marketplace. Crooners Bar was replaced by the French Bistrot. Vista Lounge became a Gaming Lounge. The night club near the casino was removed and the casino was enlarged with VIP gaming. Sabatinis was removed and replaced with Harmony Chinese Restaurant. Part of the spa area was turned into Karaoke Suites.

A major difference in this category of ship is that the adult pool and retreat area are now covered by glass. 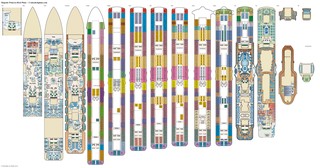