You can expect between 2602 to 3122 passengers on a typical sailing. This means that at the higher number (usually peak and holiday sailings) Grand Princess has a space ratio of 34.4 . (A space ratio less than 33 means that you may find the ship crowded in areas. A space ratio greater than 39 means that there should be plenty of space for each passenger.) When this ship isn't sailing at capacity the space ratio can be as good as 41.3.

There are 16 decks on this ship. The highest deck number is 17. The number of decks with passenger cabins is 8.

GRAND PRINCESS is the lead vessel of a series built for P&O Princess. She was the first in the companies fleet to exceed 100,000 tons. The Grand had some major changes during the April and May 2011 drydock. This includes removal of skywalkers lounge, conversion of deck 5 atrium to the piazza, new pizzeria in the Piazza, International Cafe, Vines wine and seafood bar, Convert Sterling steakhouse to Crown Grill, New deck 7 tea lounge and library, Upgrade casino, Addition of deck 6 window suites ,Upgrade Horizon Court, Upgrade Lotus Spa, New deck 15 Wedding Chapel/conference room.

During drydock in Dec 2016 Sabatini's went through a major redesign, Coffee and Cones venue was added to ship, the Movies Under the Stars screen was replaced, and the youth center was redesigned. 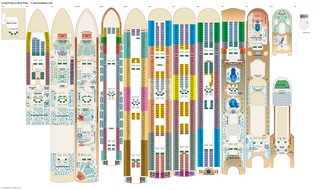