You can expect between 2632 to 3158 passengers on a typical sailing. This means that at the higher number (usually peak and holiday sailings) Golden Princess has a space ratio of 34.5 . (A space ratio less than 33 means that you may find the ship crowded in areas. A space ratio greater than 39 means that there should be plenty of space for each passenger.) When this ship isn't sailing at capacity the space ratio can be as good as 41.4.

There are 16 decks on this ship. The highest deck number is 17. The number of decks with passenger cabins is 9.

Most modern cruise ships need to be dry docked for inspection, maintenance and class surveys every five years and once they reach 15 years of age they need to be dry docked at least twice within a five-year period. Dry docks typically last up to 14 days at a cost of up to $2 million per day and involve regular maintenance including hull cleaning, exterior painting of the structure, inspection of pipes, restoration of exterior deck flooring, and installation of enhanced HVAC filter systems

GOLDEN PRINCESS is the second vessel of a series built for P&O Princess. During April 2018 drydock Sabatini's changed name to Sabatini's Italian Trattoria with new design and menu. The outdoor movie screen was updated to double the picture definition and improve the sound. 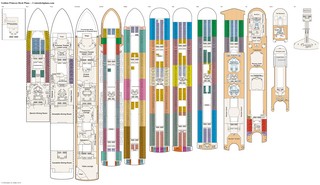