Empress of the Seas Wiki

You can expect between 1592 to 1910 passengers on a typical sailing. This means that at the higher number (usually peak and holiday sailings) Empress of the Seas has a space ratio of 25.4 . (A space ratio less than 33 means that you may find the ship crowded in areas. A space ratio greater than 39 means that there should be plenty of space for each passenger.) When this ship isn't sailing at capacity the space ratio can be as good as 30.5.


There are 4 special needs cabins on this ship. These cabins have been modified for accessibility purposes.

The abbreviation Royal Caribbean uses for this ship is NE.

EMPRESS OF THE SEAS was built for Admiral Cruise Lines as FUTURE SEAS but was taken over by RCI during construction. She was one of the first cruise ships built for 3 or 4 day cruises. She was delivered as NORDIC EMPRESS. In March 2008 she was transferred to Pullmantur Cruises and operated as Empress. In March 2016 the ship was returned to Royal Caribbean and she now operates as MS Empress of the Seas. 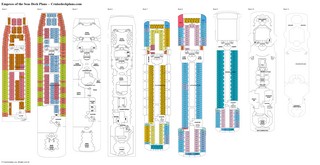