You can expect between 1754 to 2456 passengers on a typical sailing. This means that at the higher number (usually peak and holiday sailings) Disney Magic has a space ratio of 33.9 . (A space ratio less than 33 means that you may find the ship crowded in areas. A space ratio greater than 39 means that there should be plenty of space for each passenger.) When this ship isn't sailing at capacity the space ratio can be as good as 47.5.

There are 11 decks on this ship. The highest deck number is 11. The number of decks with passenger cabins is 6.

The following ships share the same class as this ship. This means the basic design and layout of the ship is the same. For the most part the cabins will be identical among these ships, but may be decorated differently.
1998 - Disney Magic
1999 - Disney Wonder

There are 18 special needs cabins on this ship. These cabins have been modified for accessibility purposes.

In 2013 Disney Magic went through a major dry dock. Here's a summary of some of the changes: The popular children's facilities was updated. Oceaneer Club, for ages 3-12, added Andy's Room, a replica of the boy's bedroom in the movie "Toy Story." It features a large functional Mr. Potato Head and a slide built into a replica of Slinky Dog. New is the Marvel's Avengers Academy, which includes the uniforms worn by Capt. America and Iron Man. The Oceaneer Lab next door shed its dated outer-space decor in favor of a decor more inspired by pirates. The nursery, for children age 3 months to 3 years old, received a new "It's A Small World" theme and brighter colors.

Animator's Palate, the restaurant recived the Animation Magic technology on Disney Fantasy, where cartoons hand-drawn by diners magically dance on the walls.

Parrot Cay, the Caribbean-themed buffet restaurant, received a sleek, sophisticated new look at Carioca's, a classic eatery with a South American vibe inspired by Jose Carioca, a character from the 1944 Disney movie "The Three Caballeros."

Topsider Buffet changed to Cabanas, as the casual eateries are known on Dream and Fantasy. The old-school buffet line was replaced with serving stations, and new Aussie-inspired decor features "Finding Nemo" characters.

The pool area on Deck 9 became one large family play area. The Mickey-shaped pool disappeared and was replaced by water sprays and a bucket dump, as well as a water play area for kids in diapers. The new AquaDunk thrill ride starts with a countdown until the floor drops from under the rider, who then shoots down a translucent tube that winds over the side of the ship.

In September 2015 Disney added 6 inside staterooms on deck 2 in place of the Edge teen center which was moved to deck 9 midship. It appears that 6 oceanview and 2 inside cabins on the aft of deck 2 were taken out service. Disney added a new Concierge Lounge to deck 10 midship and Bibbidi Bobbidi Boutique was addEd to deck 10 foward funnel. 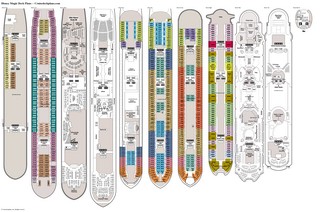