You can expect between 2206 to 2647 passengers on a typical sailing. This means that at the higher number (usually peak and holiday sailings) Celebrity Summit has a space ratio of 34.1 . (A space ratio less than 33 means that you may find the ship crowded in areas. A space ratio greater than 39 means that there should be plenty of space for each passenger.) When this ship isn't sailing at capacity the space ratio can be as good as 40.9.

This ship underwent a major refurbishment in Jan 2012. New balcony and inside cabins were added to deck 11 aft. New oceanview cabins were added near the conference center on the aft of deck 3. New venues were added including Bistro on Five, Qsine, Martini Bar, Crush Bar.

During drydock Feb 27, 2016 Rooftop Terrace added to aft of deck 12. Tuscan Grille replaced Normandie. There were also updates to Suites, Casino and Solarium.

During dry-dock ending March 23, 2019 the forward part of the sports deck was converted to the Retreat Sun Deck. This including installing a hot tub. 13 Aqua Class staterooms were added in the spa area of the resort deck. The Hair Salon was moved to the port side. The two story library on the sky and panorama deck was removed and replaced by 4 inside staterooms. Michaels Club on the promenade deck was converted to the Retreat Lounge. Seven ocean view cabins were added to the port side of the plaza deck in place of part of Tuscan Grille. 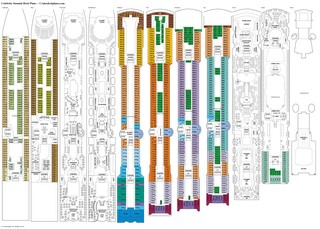