You can expect between 2218 to 2662 passengers on a typical sailing. This means that at the higher number (usually peak and holiday sailings) Celebrity Millennium has a space ratio of 34.2 . (A space ratio less than 33 means that you may find the ship crowded in areas. A space ratio greater than 39 means that there should be plenty of space for each passenger.) When this ship isn't sailing at capacity the space ratio can be as good as 41.

During drydock in May 2012 the ship received 66 brand new cabins, and the introduction of 107 AquaClass cabins onto the ship on this go-round. Other new features include: New verandas for suites, an upgraded basketball court, craft beer in Michael's Club and the introduction of iLounge. The ship also has Wi-Fi throughout, new color schemes, new carpeting, new upholstery and new sun loungers on the pool decks.

During May 2016 dry-dock, the Sun Terrace on the aft of the Sports Deck was converted to the Roof Top Terrace. The new Rooftop Terrace, complete with its large screen, chaise lounges, cabanas, soundscape and decorative lighting, is a modern relaxing backdrop for Celebrity's sumptuous new multisensory experience, "A Taste of Film," which presents films that evoke a specific cultural, culinary or destination experience, paired with cuisine that brings the scenes on the screen to life through guests' taste buds.
Additional dry-dock enhancements included significant renovations of the ship's Penthouse and Royal Suites including new fixtures, marble surfaces, carpeting, drapes and bed linens. Celebrity also converted the Olympic restaurant to Tuscan Grille. The Tuscan Grille is an inspired Italian steakhouse. Plus the Solarium was refreshed with new floors, furniture, pool tops and the spa cafe was also updated.

During drydock Jan 5 to Feb 9, 2019 added 13 AquaClass cabains to forward starboard side of Resort Deck 10 in place of the Hair Salon. The Hair Salon was moved to the port side of the deck. Also added 17 inside cabins. This includes 2 on Sky Deck 9 midship, 2 on Panorama Deck 8 midship (removed library), 3 on Vista Deck 7, 3 on Penthouse Deck 6 and 7 on Plaza Deck 3 reducing size of Tucan Grille. The forward part of the Sports Deck 12 was converted to a new Retreat Sun Deck. 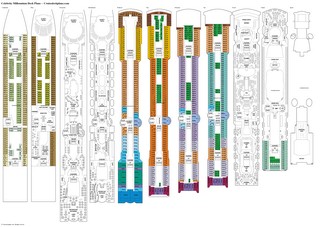