You can expect between 2170 to 2604 passengers on a typical sailing. This means that at the higher number (usually peak and holiday sailings) Celebrity Infinity has a space ratio of 34.6 . (A space ratio less than 33 means that you may find the ship crowded in areas. A space ratio greater than 39 means that there should be plenty of space for each passenger.) When this ship isn't sailing at capacity the space ratio can be as good as 41.6.

The ship last major refurbishment was in Nov 2018 .

In 2011 the ship received 66 brand new cabins, and the introduction of 107 AquaClass cabins onto the ship on this go-round. Other new features include: New verandas for suites, an upgraded basketball court, craft beer in Michael's Club and the introduction of iLounge. The ship also has Wi-Fi throughout, new color schemes, new carpeting, new upholstery and new sun loungers on the pool decks.

During drydock Oct 2015 the Rooftop Terrace was added to the aft of deck 12 (formerly a sun deck). Tuscan Grille will replace SS United States on Plaza deck. Suites accommodations (Royal and Penthouse) were upgraded with new furniture and decoration including new carpet, drapes and linens. The Casino was renovated with new furniture and floors. The Solarium, AquaSpa Cafe and Lido pool also were updated. 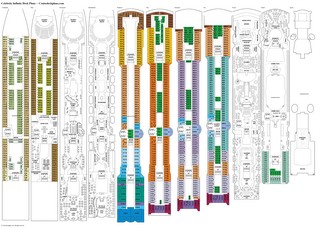