You can expect between 3138 to 3766 passengers on a typical sailing. This means that at the higher number (usually peak and holiday sailings) Caribbean Princess has a space ratio of 30 . (A space ratio less than 33 means that you may find the ship crowded in areas. A space ratio greater than 39 means that there should be plenty of space for each passenger.) When this ship isn't sailing at capacity the space ratio can be as good as 36.

The ship last major refurbishment was in Jun 2019 .

There are 17 decks on this ship. The highest deck number is 18. The number of decks with passenger cabins is 9.

During drydock June 2019 changes were made to aft of deck 17 including a Game Zone (Oversized Jenga and Cornhole) and Splashpad Water Playground (Sprays and splash pool). 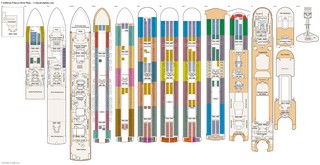