You can expect between 704 to 774 passengers on a typical sailing. This means that at the higher number (usually peak and holiday sailings) Azamara Pursuit has a space ratio of 39.1 . (A space ratio less than 33 means that you may find the ship crowded in areas. A space ratio greater than 39 means that there should be plenty of space for each passenger.) When this ship isn't sailing at capacity the space ratio can be as good as 43.

The ship last major refurbishment was in Jul 2018 .

The following ships share the same class as this ship. This means the basic design and layout of the ship is the same. For the most part the cabins will be identical among these ships, but may be decorated differently.
1999 - Azamara Onward
2000 - Azamara Journey
2000 - Azamara Quest
2001 - Azamara Pursuit

There are 5 special needs cabins on this ship. These cabins have been modified for accessibility purposes.

This ship was originally one of the eight ships ordered by Renaissance Cruise Line before it went out of business. In April 2016 this ship became the first ship to sail under Fathom Cruise Line sailing to Dominican Republic and Cuba.

This ship returned to P&O UK in summer 2017. The ship was sold to Azamara and started sailing as the Azamara Pursuit in March 2018. 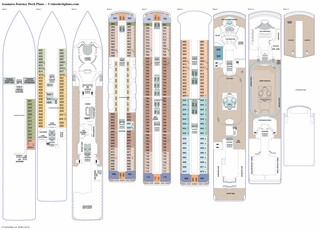