The Aurora started sailing in 2000 . Former names: none. The Aurora is registered in Hamilton, Bermuda. The Aurora has 960 cabins. 44 percent of the staterooms on board have balconies.

You can expect between 1920 to 2304 passengers on a typical sailing. This means that at the higher number (usually peak and holiday sailings) Aurora has a space ratio of 33.1 . (A space ratio less than 33 means that you may find the ship crowded in areas. A space ratio greater than 39 means that there should be plenty of space for each passenger.) When this ship isn't sailing at capacity the space ratio can be as good as 39.7.

There are 13 decks on this ship. The highest deck number is 13. The number of decks with passenger cabins is 7.

The following ships share the same class as this ship. This means the basic design and layout of the ship is the same. For the most part the cabins will be identical among these ships, but may be decorated differently.
1995 - Oriana - No longer sailing
2000 - Aurora

Aurora is a mid-sized cruise ship, instantly recognisable thanks to her elegant tiered stern. Like Oriana, Aurora is designed as a classic ocean going vessel and is therefore ideally suited to world cruising. At her heart is a Lalique-inspired waterfall which forms the centrepiece of her atrium - one of her signature features.

When it comes to bars she offers a variety to suit every mood including her Crow's Nest bar, which offers a great view of every port along the way (and the oceans in between), Champions sports bar and adjacent casino, and Anderson's with its rather sophisticated wood panelled walls. Entertainment wise there's the Playhouse cinema which shows recently released films, a show lounge and theatre.

Her dining options include her two main restaurants, as well as a bistro by Marco Pierre White and an al fresco grill restaurant.

P&O Cruises Aurora is designed for walking or jogging with the opportunity to do just that around her circumference thanks to the broad teak promenade deck. She also welcomes families with children's clubs and a dedicated family pool. She even has one pool which can be covered by a sky dome.

During March 2019 drydock 23 cabins were added to the aft of Deck 8. This includes 6 balcony cabins and 5 deluxe balcony cabins. This removed the childrens play rooms and the ship became a adult only cruise ship. 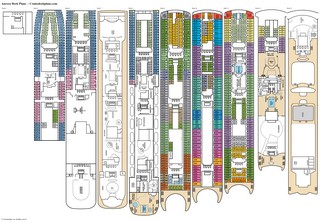