Use drop down menu on bar above to choose another deck

You are viewing deck 4 Michelangelo

Stateroom (cabin) categories on this deck

There are no staterooms on this deck

Public areas (spaces) on this deck

You can click on any image for larger size.

The ship's three tiered main theater with entertainment on offer ranging from musical and ballet productions to laser light shows and circus acts.

The ship's small library with a selection of books available in a number of languages.

The smaller of the ship's two tier formal restaurants.

The ship's main 24-hour computer area with several terminals and a printer.

The larger of the ship's two tier formal restaurants.

Click the Cabin Check Tool to check what is on the deck above or below your stateroom: 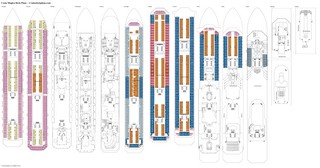